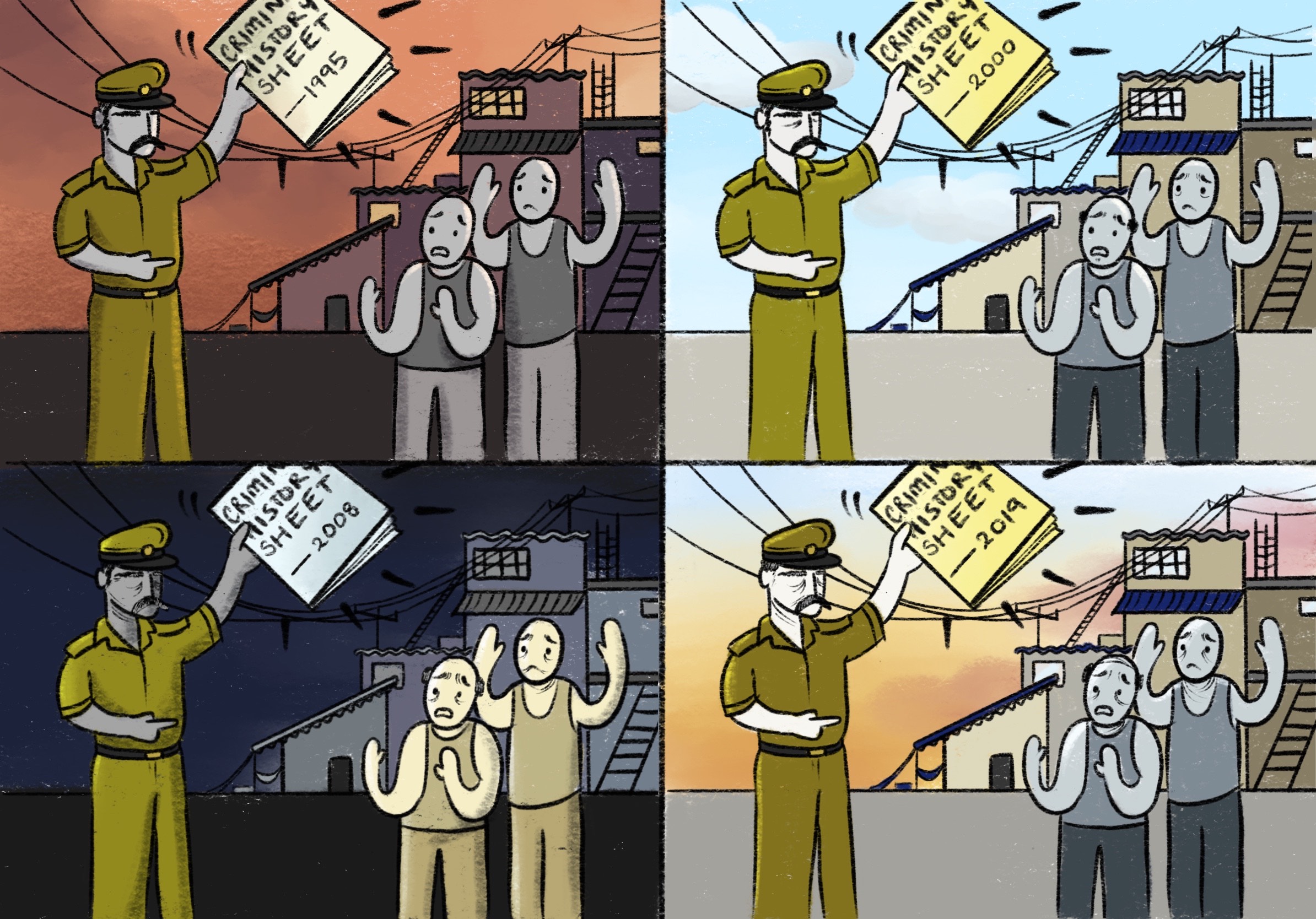 The Punjab Police Rules (PPR), 19342 Punjab Police Rules or PPR, 1934 is present in three volumes. Volume 3, page number 641 is the one referenced here. Access: https://punjabxp.com/wp-content/uploads/Punjab-Police-Rules-III.pdf serve as the guiding document for making preventive police registers in India. According to these rules, a “history sheet” is made for all persons for whom: (a) a warrant for summons has been issued under Section 87 Code of Criminal Procedure (CrPC); (b) for all released convicts for whom an order under Section 565 CrPC is made; (c) for all those convicts whose sentences have been suspended in the whole or if any part of the sentence is conditionally remitted under Section 401 CrPC and, (d) who have been restricted under Section 16 of the Habitual Offenders (Punjab) Act, 1918.

Further, the rules specify that a second part of the register be made according to the discretion of the Superintendent of Police; here names of people added are who: (a) have been convicted twice or more than twice of offences mentioned in rule 27.29 of the PPR. (This includes all offences from cheating, robbery, dacoity, rape, counterfeit currency, to murder, extortion and theft)3All the offences can be accessed here http://sirsa.haryanapolice.gov.in/template/police%20rules/PPR_Volume_III.pdf , (b) are ‘reasonably believed to be ‘habitual offenders’ or receivers of stolen properties whether they have been convicted or not, and (c) persons who have to furnish security under Section 109 and 110 of CrPC, and lastly (d) convicts who are released before the completion of their sentence without any conditions.

It is the second part of the register that especially warrant attention, especially points b and c, ie. those who are believed to habitual offenders (of course, by the police) and those who have been asked to furnish security in terms of money in order to prove to the judge that they will curtail their mischief. Words like ‘reasonable belief’ and ‘habitual offender’ are not legally defined and thus rely on police officers for their interpretation.

My interviews with police officers in Delhi revealed that they keep a tab of people’s income and possessions and record the names of people (assumingly in the history sheet register) if they have reason to believe that the person is living beyond their means. Officers say that they are able to ascertain this when they notice a marked change in the lifestyle of youths who are poor, for example, a poor boy from the slums suddenly owns a new bike or clothes. This demonstrates visible surveillance that is only possible with a specific set of the population who do not have the luxury of the privacy provided by gated residential societies. A number of officers during my field work in Delhi admitted that they believed that people living in slums–predominantly Dalit, Adivasi, migrants, and/or Muslims– were responsible for crime in Delhi.

Poverty intersects with caste in a caste society such as India making these assumptions of the police a proxy for their own caste beliefs and prejudices 4The history sheets are overtly represented by people belonging to Dalits and Muslims and are confirmed by scholars such as Khanikar (2018) and Dhareshwar and Srivatsan (2012). Also, according to Status of Policing in India Report 2018, Delhi police ranks 11th amongst the 22 states studied for diversity in India. This news report further shows how police officers recruitment at the lower levels do not follow affirmative action laws of the Indian State making it a highly upper caste institution at that level. . Prefixing ‘habituality’ to crime also attaches a certain kind of biological determinism to crime, insinuating that crime was not a result of structural and social factors but rather a biological trait of some people, who then need to be databased and surveilled. Ambedkar’s 1979 analysis of Manusmriti 5Ambedkar BR, Dr. Babasaheb Ambedkar, Writings and Speeches: Philosophy of Hinduism ; India and the Prerequisites of Communism ; Revolution and Counter-Revolution ; Buddha or Karl Marx (1979) revealed a heavy imbalance between the crime and its punishment for the lowest castes in India; a Shudra would be flogged for the same crime for which a Brahmin would be let scot-free and a Kshatriya or Vaishya let off with a fine. The punishment being tailored to the caste of the ‘criminal’ and not the crime reveals Indian society’s belief of crime being natural of certain communities while being an accident in others.

The law mandates that those who have been asked to provide security under Sections 109 – 110 of CrPC to be put on history sheets. These Sections of CrPC, as Radhika Singha has argued 6Singha R, ‘Punished by Surveillance: Policing “dangerousness” in Colonial India, 1872–1918’ , were introduced in CrPC 1861 to discipline those who were considered ‘dangerous’ by the police in colonial times. These were generally people who did not follow the settled, agricultural, upper-caste way of life and posed a threat to the ‘normal’ citizens of the state (ibid.). Singha argues that though both Criminal Tribes Act 1871 and Sections 109-110 were introduced at the same time, the latter was used more because of its vague verbiage and lax requirement of evidence. Section 109 CrPC 1973 carries forward similar verbiage, stating that if the executive magistrate has reason to believe that a certain person is hiding their whereabouts for the purpose of committing a crime, they should be asked to furnish security. Section 110 CrPC 1973 also asks for surety/money bonds if a person, among other things, is deemed to be ‘dangerous’ so that “his being at large is hazardous to society.” This language is open to vague interpretations and abuse because of the known prejudice of police against marginalized communities living in slums and ghettos who face the brunt of visible surveillance. People who are unable to furnish surety or money bonds are convicted and earn a crime record without committing any crime. Just the act of being asked to furnish security is considered as proof of crime and used as a crime record for future convictions or sentencing.

As we learn the immutable harms that digital databases and their accompanying algorithmic systems can do in carceral contexts, it is essential to step back and note the forms of “paper-based” surveillance that preceded these systems. Paper-based registers work similarly to digital databases in imposing a specific kind of “socially-cleansed” society free of undesirables. The undesirability stems from one’s caste location; no wonder, as scholars Dhareshwar & Srivatsan 7Dhareshwar V and Srivatsan S. ‘‘Rowdy Sheeters’: An Essay on Subalternity and Politics’ in Amin S and Chakrabarty D, Subaltern Studies: Writings on South Asian History and Society (Oxford University Press, USA 1996) and Khanikar 8Khanikar S, ‘State, Violence, and Legitimacy in India’ found that these “history sheets” disproportionately list people from marginalised backgrounds and especially from non-dominant castes. Police discretion to record ‘criminal tendencies’ of young people based simply on their lifestyle or even their physical appearance follows age-old stereotypes where people, especially those living on the margins, were supposed to look, behave and live a certain way. A man who lives in a slum and starts wearing expensive-looking clothes or driving a motorcycle is seen as suspicious and could be recorded in these registers because of a perceived infraction to class norms in society.

Even though laws like Criminal Tribes Act of 1871, which prescribed criminality to entire groups, have been struck down, Habitual Offender Act 1918 and the provision of extracting security from people who inadvertently ‘look suspicious’ to police officers (CrPC sections 109-110), maintain the long lineage of policing caste and social locations in India. Paper-based registers are the building blocks of digital carcerality, ubiquitous in Indian policing and more common than their digital counterparts. These registers make plain the state’s long-held interest in surveillance, its precarious motivations for detaining people and its prejudiced constructions of criminality that need to be reckoned with at a fundamental level.