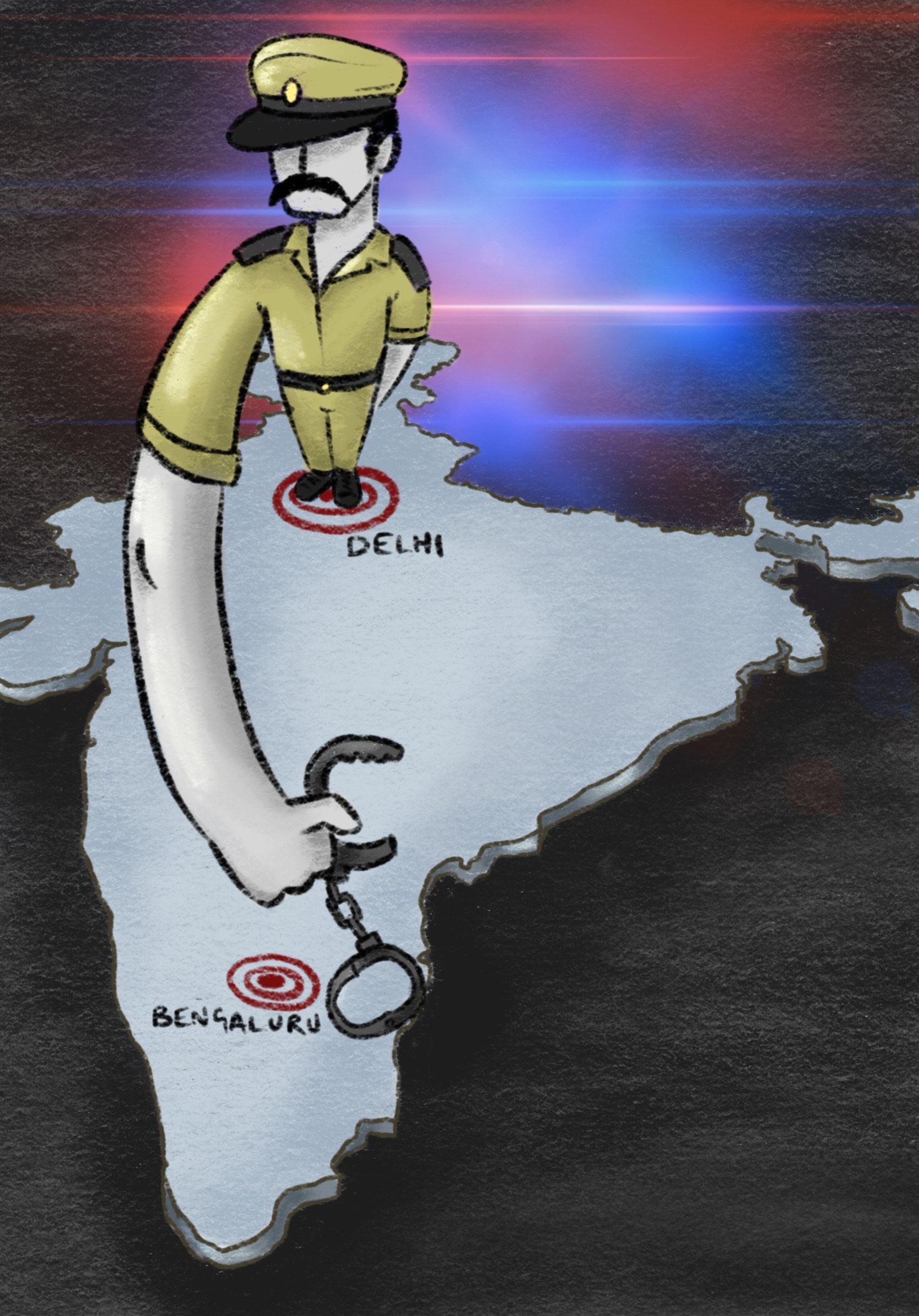 On 13 February, 2021 the Delhi Police arrested 21 year old Disha Ravi who was booked for sedition and other offences in connection with the ongoing farmers’ protests. She was accused of editing a toolkit created to help people understand the protests and released 10 days later on bail. Disha’s arrest appears to be part of a massive crackdown on people who have been highly critical of the government’s handling of the protests. For instance, journalists and politicians have been booked for sedition and other offences after they alleged that a protester had been killed by the police.

It is important to note that Disha’s arrest was an inter-state arrest as the Delhi Police arrested her from Bengaluru. The Delhi Police had obtained an arrest warrant against her from a court in Delhi. On 13 February, two teams of the Delhi Police arrived in Bengaluru.  Soon after she was arrested, one team took her to the airport while the other team went to the local police station to officially inform the local police about her arrest. She was produced before a magistrate in Delhi on February 14, approximately twenty hours after her arrest.

This case symbolises how high-handedness has been corroding the bulwarks of liberty. Apart from the vindictive nature of the arrest, what is worrisome is the ease of arresting a person from another state and taking her away to a distant place, without judicial authorization. The fact that constitutional safeguards are not percolating into everyday lives ought to make us ponder whether the Indian State has transformed the Constitution into a mirage. There is more to this problem than the mere failure to follow the law. We also need to be concerned about the normative dimensions of inter-state arrests and legal reforms to address the faults in the law.

The manner in which Disha was arrested has exposed the frail nature of the safeguards against arbitrary arrests. Firstly, Article 22 of the Constitution enshrines the right of an arrestee to be produced before the ‘nearest magistrate’ within 24 hours of the arrest. When the arrest took place in Bengaluru, the expression ‘nearest magistrate’ refers to a magistrate in Bengaluru. However, the Delhi Police rushed back to Delhi without producing Disha before a magistrate in Bengaluru and seeking transit remand to take her to Delhi. As a result, she was deprived of an opportunity to be represented by a lawyer of her choice who could have sought her release on bail immediately.

While it is true that she was produced before a magistrate in Delhi, it is important to understand that this does not make up for the failure to produce her before a magistrate in Bengaluru.  This is because the power imbalance between the State and the arrestee worsens as soon as the arrestee is taken away from the place where she ordinarily resides. For instance, engaging a competent lawyer in an unfamiliar place is an onerous task. Therefore, it is hardly surprising that Disha was not represented by a lawyer of her choice before the magistrate in Delhi but was instead represented by one of the legal aid lawyers who may not have been fully conversant with the case. This is an affront to the fundamental right to be defended by a legal practitioner of one’s choice, as enshrined in Article 22. Experts have opined that it is rather common for the police to avoid seeking transit remand and often, the police do not inform the arrestee’s lawyer about the correct time at which she shall be produced before the magistrate. As a result, the arrestee’s lawyer is precluded from defending the arrestee and instead, an unprepared legal aid lawyer will have to defend her.

A young arrestee’s detention in an unfamiliar city with poor legal representation reminds us of what Thakur Das Bhargava had said when the Constituent Assembly was discussing Article 22: ” What happens after a person is arrested or detained?… he is alone in the world, and the forces of the Police, the forces of the Crown and all other forces combine against him and he is helpless.“

Furthermore, the arrestee’s access to local help and support from civil society is almost cut off when she is quickly taken away to another state. Therefore, in such cases, the police evade judicial and public scrutiny. Contrast Disha’s arrest with Gautam Navlakha’s arrest by the Maharashtra police in Delhi. The police produced him before a magistrate in Delhi and sought transit remand. Though the remand was granted, Navlakha approached the Delhi High Court which immediately stayed the order and granted interim relief to Navlakha. Unlike Disha, he was represented by lawyers of his choice, managed to challenge his arrest before two courts and probably there was sufficient time to seek help from his circles in Delhi.

The failure of the Delhi Police to seek transit remand from a magistrate in Bengaluru before taking Disha to Bengaluru also violates the directions of Delhi High Court regarding inter-state arrests. In 2019, the Delhi High Court expressed displeasure at the Uttar Pradesh Police for arresting a person from Jawaharlal Nehru University in Delhi and taking him back to Uttar Pradesh without informing the local police and without seeking transit remand from a magistrate in Delhi.

As the Delhi Police arrived at Disha’s house in the afternoon, they had enough time to seek transit remand from a magistrate in Bengaluru. The police appear to have ignored the mandate of Section 80 of the Code of Criminal Procedure, 1973 (CrPC) as well. Section 80 stipulates that when an arrest warrant is executed outside the jurisdiction of the court which issued it (in this case, the Delhi court), the arrestee must be produced before the Commissioner of Police or the executive magistrate having jurisdiction over the place of arrest. It has been reported that she was taken to the airport soon after being arrested and that the senior officers of Bengaluru Police were informed only after her arrest. Therefore, it is improbable that the police produced her before the Commissioner or the executive magistrate.

Contempt for the Law

While it may be argued that the manner in which the Delhi Police arrested Disha is irregular and not illegal, it does reflect the scant respect the police had for the High Court’s directions. It clearly indicates that the police took advantage of the lack of precise provisions pertaining to inter-state arrests in the CrPC. It is time to create a legislative framework to regulate inter-state arrests by amending the CrPC so that arrests do not resemble abductions. Judicial guidelines on inter-state arrests are ineffective as their operation and efficacy are hindered by jurisdictional limitations on the High Courts and the cumbersome procedure to punish violations. A legislative intervention would also ensure that there is uniformity which is otherwise hard to achieve with judicial guidelines from multiple courts.

The Karnataka High Court ought to summon the Delhi Police and the local police and ask them to explain their actions so that such arrests are not normalised. As Justice Louis Brandeis had cautioned: ” Government is the potent, the omnipresent teacher. For good or for ill, it teaches the whole people by its example…If the government becomes a lawbreaker, it breeds contempt for law; it invites every man to become a law unto himself”.